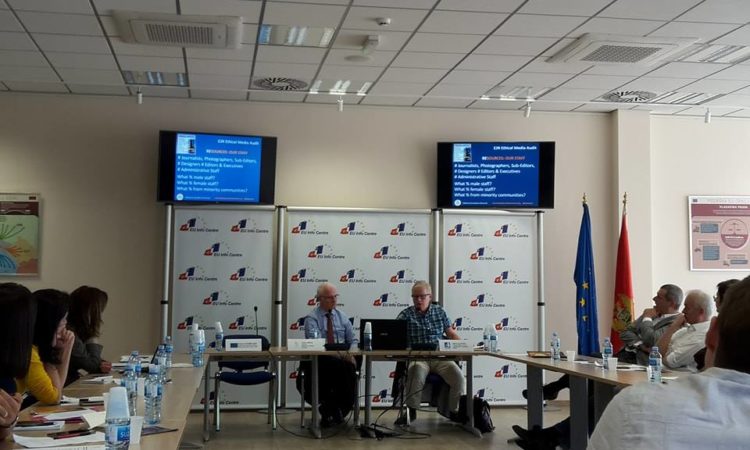 Representatives of the NGO Mladiinfo Montenegro attended the presentation of the “Program for Good Media Management” which was held on October 18, 2017, in EU Info Center in Podgorica. The program promotes widely represented media management models in European countries.

With a welcome speech, the meeting was opened by a representative of the European Union delegation of Montenegro, Patrick Schmelzer. The project was presented by the director of the Ethical Journalism Network (EJN), Adian White and Bernt Olufsen, former and chief editor of Schibsted Media. This network it is formed by 60 groups of journalists, editors, media owners, and media support groups around the world.

The Norwegian journalist Bernt Olufsen shared experiences from his country and pointed out:

“Throughout years and in my experience, I realized that what builds confidence between people, the media and the audience is the ability to recognize their own mistakes, correct them and show them.”

The aim of the project is to strengthen the freedom of expression, the free access to information, and to strengthen the capacities of free, professional media and media pluralism. This is the basis in which journalists and media organizations in Southeast Europe and Turkey should be recognized as key drivers of democratic, sustainable and peaceful development in the region.

The educational event provided an opportunity for the participants to discuss ethics in online media, issues, and dilemmas they are facing.

Due to a clear decline in citizens’ confidence in the media, the project is also being implemented in BiH, Albania, Kosovo, Macedonia, Serbia and Turkey.