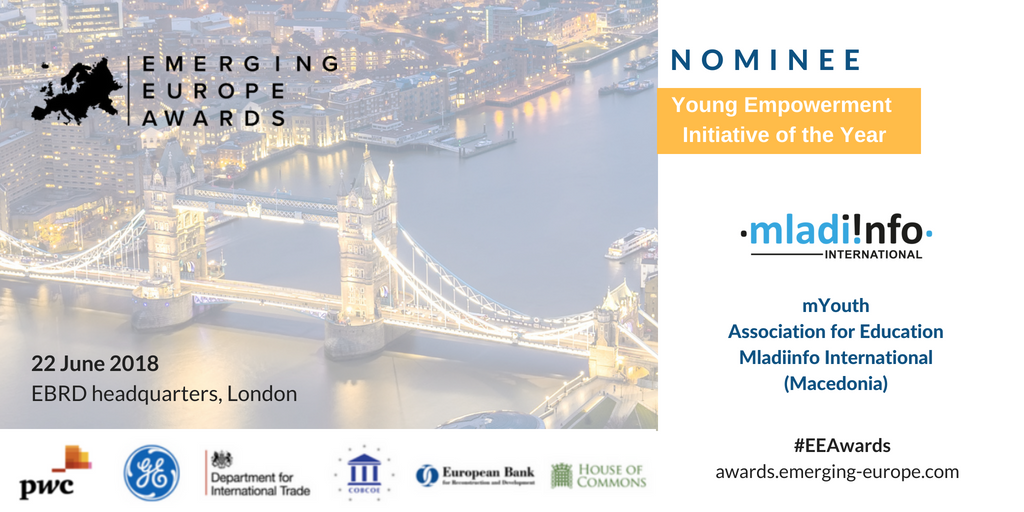 We were truly delighted when a mail reached us in the early May with the information that Mladiinfo with its capacity-building project – mYouth is one of the nominees of the Emerging Europe Awards 2018 in the category of Young Empowerment Initiative of the Year.

It was a great honor as well as a responsibility towards all our readers, stakeholders, fans and followers to be one of the 10 nominees in the category Youth Empowerment Initiative of the year and to be in a company of truly amazing, impactful and innovative initiatives: from social impact start ups to foreign direct investment projects. Our MYouth project was a nominee and placed in a company of other 9 great initiatives such as initiatives of Coca-Cola HBC Baltics, European Bank for reconstruction and development, as well as Teach for Armenia – who won the award . Learn about this achievement: https://www.awards.emerging-europe.com/nominees/

At the same time we were enormously happy that our work is recognizable and valued, and on the other hand we were exited for the upcoming opportunity to attend on such event as Emerging Europe Awards.

The Emerging Europe Awards celebrate the outstanding efforts of those who consistently work towards the economic and social development of the region and contribute most to its growth.

The event was held in London from 21-22 June were our Director of Programme Development Ana Alibegova presented Mladiinfo International and had an amazing opportunity to share our know-how with other representatives from Europe. 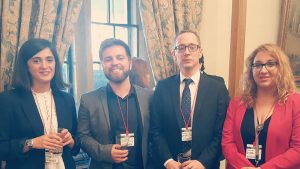 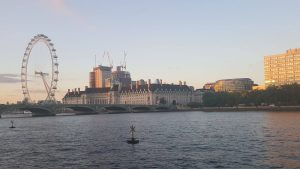 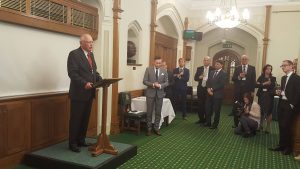 The Welcoming Reception took place at the Palace of Westminster, where policy makers, business community, civil society representatives as well as diplomats of the Emerging Europe countries in London attended. The welcoming reception was launched with a hot discussion about Brexit, upcoming challenges in Europe, as well as direct foreign investment in emerging Europe, at the House of Commons and European Bank for Reconstruction and Development.

On the second day of the event at the European Bank for Reconstruction and Development, among other presentations and discussions, a roundtable session dedicated to social innovation and dynamic entrepreneurship was held. All participants that were at the roundtable agreed that a shift in the educational system is needed and most of the CEE educational models were defined as “old and obsolete.”

“Being human is something you cannot learn, but you can work on,” said Ana Alibegova during the roundtable session dedicated to social innovation on and dynamic entrepreneurship. Find more about the panel here: https://emerging-europe.com/in-brief/lets-not-fear-technology-lets-embrace-it/ 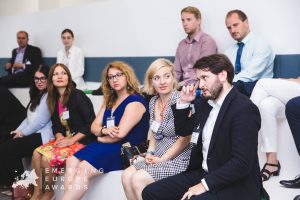 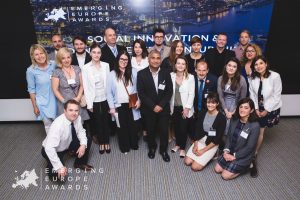 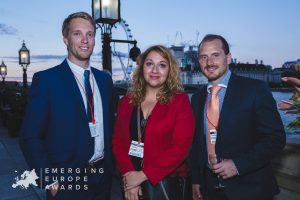 In the main spotlight of the event was the award ceremony, where 113 number of initiatives got recognition for the efforts they make for better “emerging” Europe.

Last but not least, we can say that rarely we find such events that open new horizons and present an extraordinary experience. Emerging Europe Awards was one of a kind, indeed.

We hope this experience will be a springboard for even more quality projects and changed lives of youngsters by Mladiinfo!

Big thank you to #EEAwards from the Mladiinfo International team, hope to see you soon! 🙂